The family took a little trip and I decided that rather than be away from Fork and Hay, I would take a little Fork and Hay with me. I could get used to this concept.

I still haven't finished the first keg yet but I went ahead and tapped the second keg, since I wanted to test the travel properties of a full keg. The second keg has two main differences from the first one. It was fermented with Danstar Nottingham yeast rather than Safale US-05, and I brought it inside to warm up for another week in the hope of getting a diacetyl rest (if you recall the last post).

Once again I have changed too many variables simultaneously to draw specific causalities, but the observed properties of this sub-batch are pretty clear. It finished at 1.012, which is a much better attenuation than the other carboy exhibited. It's also free of the off-flavor I tasted in the other keg and in the previous Por Favor batch. Subjectively, it's a better tasting beer than the other keg, and I have some ideas for the next batch to help nail it down.

I think I'm going to do two things in the short term. I will brew a Por Favor with a different yeast rather than US-05, like maybe White Labs WLP001 or Wyeast 1056. Those are both American ale type yeasts and maybe they will provide a different result. The second thing is that I will return to using Wyeast 1098 for the Geordie-Boy recipes. The Nottingham batch tastes good but it's not the same as the first batches of brown ale I made, and I need to eliminate some variables.

Is driving with a corny keg a violation of "open container" laws?

I don't bottle much. That presents a mobility challenge of a sort, because a corny keg isn't exactly the most packing-considerate form factor for carrying beer. (For one thing, they don't fit too well in ice chests.) There appear to be three challenges to overcome when traveling with a keg beer system, and I addressed them on this trip with varying results.

First and perhaps most obvious is the relentless pressure. Not the pressure of traveling or of being expected to share your beer, but the need to pressurize the keg for dispensing. At home, pressure is maintained by the CO2 system in the kegerator, with regulators and manifolds and all the various required accoutrements. On the road, you have to be able to apply pressure to serve. (A fundamental assumption is that the keg is already properly carbonated.)

seemed to be the simplest option for managing pressurization. It uses the little CO2 cartridges that are often used in pellet guns, and you use it to maintain sufficient head pressure in the keg to force the beer to dispense. It has no regulator; instead, it has a trigger mechanism that you use to shoot a burst of CO2 into the keg to get the beer flowing. It kind of works like the party taps you might have used in your college days. On the whole, I'm pretty pleased with this solution, as it's pretty easy to tell when you need to trigger the gas because the beer flow slows to a trickle. 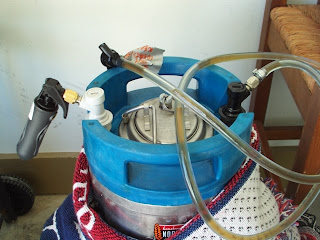 In this picture you can see the CO2 charger attached to the keg. It connects to a regular 1/4" male flare fitting, like the one found on some gas-side ball lock quick disconnects. I didn't have a spare lying around, so I had to disassemble one of my kegerator gas hoses to get the fitting I needed. It worked just fine, and I'll order another QD just for the portable charger.

Once you have the head pressure on the keg you need to get the beer out. For this, I went all out and...well, nothing. As you can see I actually backrobbed one of my cobra tap hoses from the kegerator. Hey, it works. The problem I found with it is that it doesn't stay cold like it would in the kegerator, so the beer that runs out first is warmer than the rest of the pour. Since the unofficial motto of Fork and Hay is "the warmest beer you ever drank was 'just cold enough'" that doesn't present a real problem for me. I did find that it was best to rinse the hose out every day since warm beer left in it overnight gets sticky and could present an avenue for contamination.

The other challenge is temperature regulation. As I mentioned earler, the corny keg isn't exactly a great fit in a cooler, and the other folks I traveled with objected to me putting it into the fridge at the expense of things like food. What I did was jury rig an ice based cooler out of a garbage bag and a plastic bucket. It keeps the bottom of the keg ice cold and thermal transfer chills the upper portion somewhat. Since the keg dispenses from the pickup tube in the bottom, I got cold beer fills as long as I maintained the ice level. The keg is insulated with a blanket, but the bucket is not, so one bag of ice lasts about one day. More insulation would provide a better result I'm sure.

The expense of the ice is more than offset by the convenience of having draft beer on demand and the satisfaction of knowing it's something you brewed and enjoy. I'm chalking this up as a success.
Posted by Mike at Sunday, March 14, 2010 No comments: